Posted on July 18, 2014 By lukeyatesadventure

On 6th June I took part in the Thorpe Park Triathlon. This was my second attempt at a sprint distance triathlon but the first time I would actually get in the water! There was no late night email to say the lake was unsafe and I was up at quarter to 5 and on my way to Thorpe, accompanied by Adam, one of my good mates. There had been a lot of banter between us about who would win and chatting about our expected times the night before, we realised it was going to be close. He had only started swimming seriously for this event, but had made serious progress. I had started running regularly in January following injury so he had the edge in this discipline. With very similar predicted times on the bike so we anticipated a great race!

The initial registration was very well organised and we were soon heading through to transition. This was his first ever triathlon and first for me to start with a swim so understandably we were a little bit on edge. I had everything organised, followed some good advice about how to set up your transition area and was starting to feel more relaxed. We were due off in the first wave at 7 so at about twenty-to it was time to start getting the wetsuit on and prepare to enter the water. It was at this stage that I realised I’d left my wetsuit in the car. I couldn’t believe it. If you’ve ever been to the theme park you will know that the car park is huge and not exactly close to the gate! I got my warm up out of the way at least running to the car and made it back to transition in time to force my wetsuit on during the race briefing. It was a far from ideal start. I rarely suffer with nerves, but at events like this I seem to really struggle. I didn’t help myself with the rush but managed to take a few minutes to compose myself before entering the water I thought I would be ok. 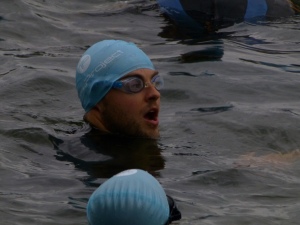 I’ve been swimming at the open water lake in Shepperton and was quite comfortable in the water; I didn’t even mind my first mass start. As I set off however my nerves really took hold. This was something I wasn’t expecting. I really couldn’t settle. My stroke felt laboured, I struggled to get my bearings and I really found it hard. As I waded out of the lake I was well behind the time I had hoped for. I’d got round in 15.40 but had regularly done 750m in 14 minutes in training. Transition went smoothly though (my planning actually paid off!) and as I set off on the bike I started to feel comfortable. Adam had pulled out a great swim and was just 44 seconds behind, patting me on the back pulled my bike shoes on! 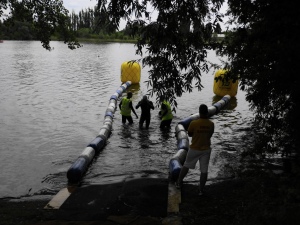 I enjoyed the bike leg. I was racing a group of guys going at a similar speed. We kept overtaking each other and the pace felt pretty good. Other than having to swerve out the way of a motorist who decided to reverse out into the middle of the road with loads of cyclists flying by, the 21km on the bike were fairly uneventful. The route was flat and fast and this kind of time-trial cycling is something I’m really looking forward to doing more of in the future. At a couple of points the route looped back on itself at roundabouts so I could see the gap to Adam was fairly consistent. Coming in to T2 I passed friends and family that had come to watch and shouted that I was about a minute ahead. I completed the ride in 39.58, pretty much bang on target. Adam did it in 40.00 exactly. This, combined with a slightly quicker couple of transitions meant I had a 59 second advantage going out on the run.

Adam’s PB for 5km is more than a minute faster than mine so at this stage I knew I was in for a hard race. I was determined not to give in without a fight. My legs started to feel good quite quickly and I felt I was running well but about a third of the way round Adam came past. This was a tough point but I forced myself to keep as close as I could. Coming round for the second lap I was about 10 seconds behind keeping the gap constant. The second lap flew by. I kept in touch, pushing myself to not drop off the pace and coming in to the last 500m I knew it was now or never. I kicked for home, gaining ground pretty quickly. Adam checked behind 200m from the finish and was surprised to see how close I was so set off himself. We both charged towards the finish. I was closing with each stride.

I completed the run in 20.44, 14 seconds outside of my 5km PB. Adam did it in 19.44. I had lost by a second. After 6 months of training and talking our chances up, we were separated by a single stride. I finished in 1 hour, 18 minutes and 38 seconds. Adam did 1.18.37. It had been a great race. Losing to him didn’t annoy me as much as I thought it would. We had both done well and pushed it hard. What did get to me was how poor my swim had been. I was really disappointed by this and knew I hadn’t helped myself with forgetting my wetsuit. It was a stupid mistake to make but I can’t really blame that. It was my own fault and I think I would have been nervous anyway. Nerves are something I’m going to have to get used to controlling. Overall I was reasonably happy with my performance. A lot of things had gone well, but as someone very competitive, I couldn’t put the bad parts out of my mind. I now can’t wait for the London Triathlon on 2nd August when I will hopefully be able to put some of the mistakes right!