Posted on August 14, 2014 By lukeyatesadventure

On 13th July 2014 I ran in the Surrey Badger Half Marathon. This was my first ever race over this distance and set off from the Denbies Wine Estate just north of Dorking. The organisation at the start was very good; parking was easy, as was race pack collection. There was even a group warm-up set to music. This wasn’t for me on this occasion as I just wanted a bit of space to stretch my legs and go through my own routine, but in future I think things like this would do me good. It takes you mind of the race and the inevitable nerves, which can really affect me. That said, at the start I was feeling very calm and ready to go. I had eaten well and was prepared. I was happy that I could cover the distance, though this brings some alternative pressure as you set a target time. My one concern was that my knee may not hold up. In long training runs, when confronted with significant hills, I had occasionally suffered from tendonitis in my injured knee and this course was described as undulating on the organiser’s website. I had been training hard however, and working in the gym on stability, so felt I could make it through unscathed.

The first few kilometres of the race were fairly flat, heading round the vineyards and then out of the wine estate. There was the usual jostling but soon the field began to spread out and I even had the confidence to lift my pace slightly. I was feeling comfortable, the weather was warm but nothing to really worry about and I really liked having water stations. It’s much easier than on training runs! There were a few short, sharp ascents in the opening six kilometres, but nothing to worry about. I’m quite a tall guy, have previously mainly played rugby and been a rower and still carry a lot of the weight associated with this. It makes it tough going uphill, but I usually make up for it on the descent as I’m able to open up my stride and enjoy gravity being on my side!

Up until this point, the course description as “undulating” was probably fair. I was enjoying the off-road paths and moving well on what was basically a trail run. The next four kilometres brought me back to reality in startling fashion. There was over 100m of elevation gain and as soon as I started on the descent, I knew something was wrong with my knee. The usual pattern is for the uphill to aggravate the injury and the down-hill to either release it or make it worse. In this case, the length and steepness of the slopes seemed to be putting an awful lot of force through the joint and I could feel the pain building.

From the route profile that I recorded on the day, it is clear that the second half of the race is more than just a little undulating. I was getting really struggling as the feeling in my knee turned from discomfort to serious pain that was jeopardising my chances of completing the race. It was the down-hill sections that were causing the most problem. The impact was sending a jolt up my leg with each stride and there were a couple of points when I really didn’t think I was going to finish. There are some awful event photos showing me pulling some pained grimaces as I half ran/half limped. I was very frustrated as I felt my fitness meant that I could run faster but my knee just wouldn’t let me. Thankfully, the marshals were incredibly encouraging and a few energy gels and sweets lifted my spirits no end. With just a couple of kilometres to go, one marshal happily announced that it was “all down-hill from here”. This wasn’t quite the news I was looking for and it really was a long descent, but the road levelled out approaching the estate. Finally there was a flat stretch, and with the pressure on my knee lifted I was immediately able to start running with something approaching a normal gait. 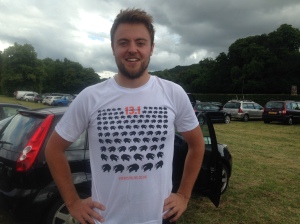 I put in a reasonable push for the finish, crossing the line in 1:51:08. It was outside my 1:40 target but considering the pain I had been in, I was delighted just to have got round. I really was proud of myself for the strength I had shown in pushing on when I really didn’t want to. I hope this will stand me in good stead for the tough parts of my upcoming adventures, as there are bound to be some difficult times. Upon completion of races, you often get a medal (which I now love collecting) or a slightly rubbish t-shirt, but in this case I really have to praise the finisher pack! There was a great technical t-shirt (pictured above), a bottle of beer and a stand handing out tonnes of fresh fruit. I can’t recommend the Events To Live organisation highly enough and would love to do more of their events in the future.