Posted on June 5, 2015 By lukeyatesadventure

My first land border from the USA to Canada was pretty unspectacular. There was no interrogation; just a “have a good trip!”. The cycle into Vancouver was fairly long and boring. The urban area sprawls for miles and the bike lanes were crazy but I eventually made it into the city. My Aunt and Uncle used to live in Vancouver and luckily they still had friends there that I could stay with. It was great to have a few days of comfort. They were very generous in showing me around the city and I was also able to meet up with another of their old friends for a few beers. On my second day off in the city, Lucy and Annika popped over from Vancouver Island and we met up for an excellent lunch at the Granville Island food market. It was just delicious and great to see them again before I hit the long road across Canada. 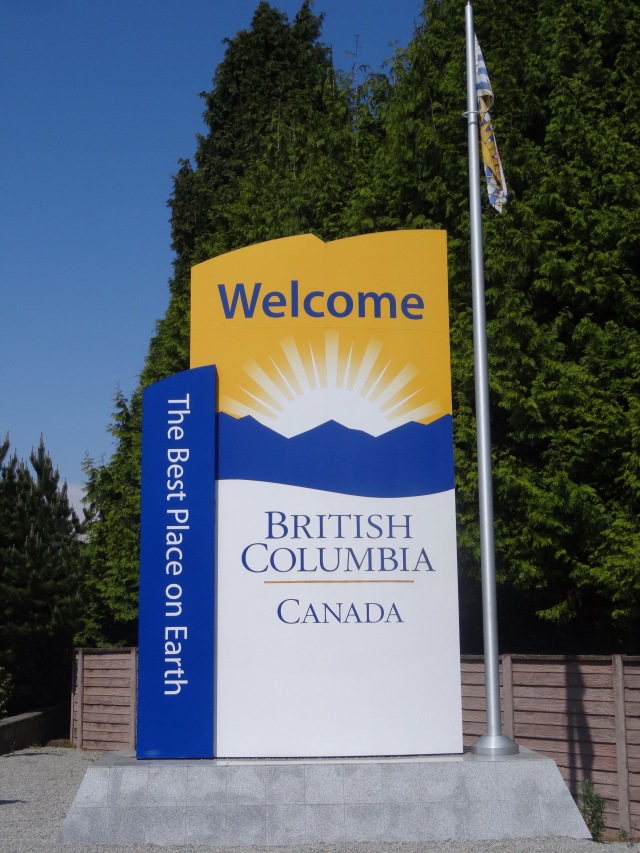 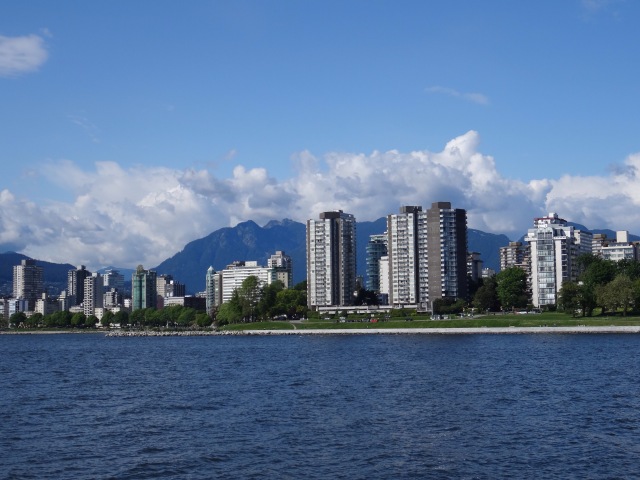 On leaving Vancouver, I decided to steer clear of the main trans-Canada highway and take the more scenic Sea-to-Sky highway up to Whistler. I would be spending enough time on the trans-Canada in the coming weeks. For the first few miles I was joined by Brian and Adam, a couple of guys from Ireland. I had met them while they were on a short trip to Seattle. They had planned a long day ride but were happy to join me for the morning and for a good lunch of fish and chips in Horseshoe Bay. We parted ways there and I struck out north towards Squamish. I grabbed some refreshment and groceries and then continued towards Whistler. As the evening drew in, I began trying to find a spot to sleep for the night. The Provincial Park campground at Alice Lake was full so my only option was to find a place at the side of the road. Generally this is legal in Canada so I had no concerns there. I found a nice place up a trail away from the road but was very aware that I was in bear country. I cooked dinner away from my tent and hung my food from a tree but I was still very nervous. It was the first time that I had camped in an area with animals that might seriously consider eating me! I survived the night but didn’t exactly sleep well. Suddenly all movements around my tent throughout the night became potential bear attacks! 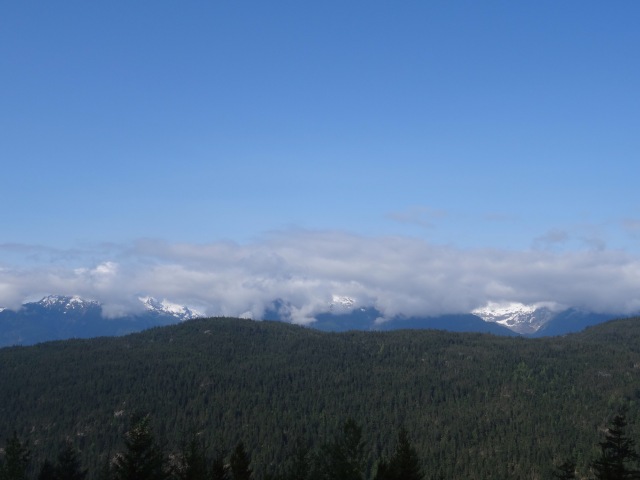 I woke up to a beautiful morning and after a quick breakfast and pack up, I headed on up the road to Whistler. It was a long, uphill slog with very gradual grades over 60 km. As I moved north, the views became more and more impressive with snow-capped mountains. I made it into Whistler and took a couple of hours off the bike. The main village of Whistler was renovated for the 2010 Winter Olympics and still looks very modern and new. I enjoyed a couple of hours relaxing in the sun watching people go mountain biking on the lower slopes and heading off to go skiing on the upper, glaciated runs. It was very cool. I headed out of town, wanting to cover a little more distance in the day and eventually finished up at the Nairn Falls Provincial Park. The campground was full but they managed to squeeze me in and I must say I was delighted. I needed some company and the relative safety of numbers. I had been warned of a big climb to come the next morning. I spent a great evening at the camp playing frisbee, drinking beer and eating S’mores with the amazingly generous Outerbridge family. It was just what I needed. 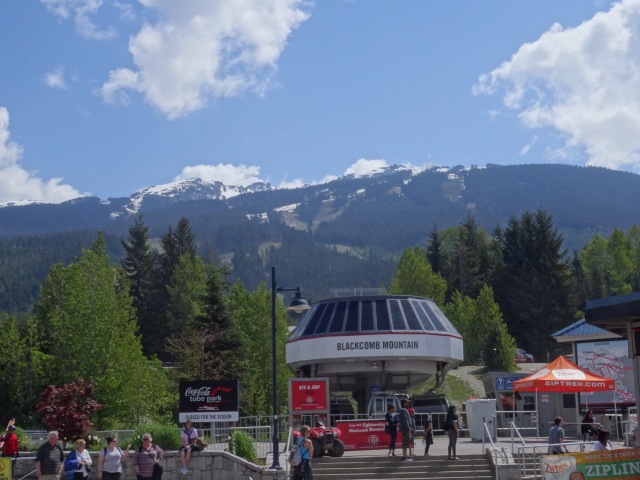 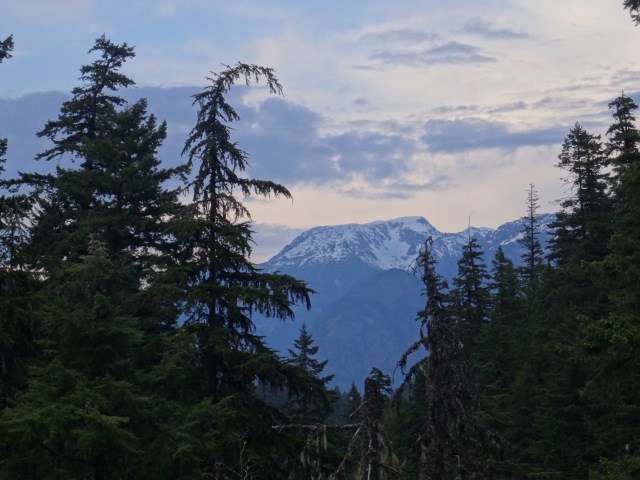 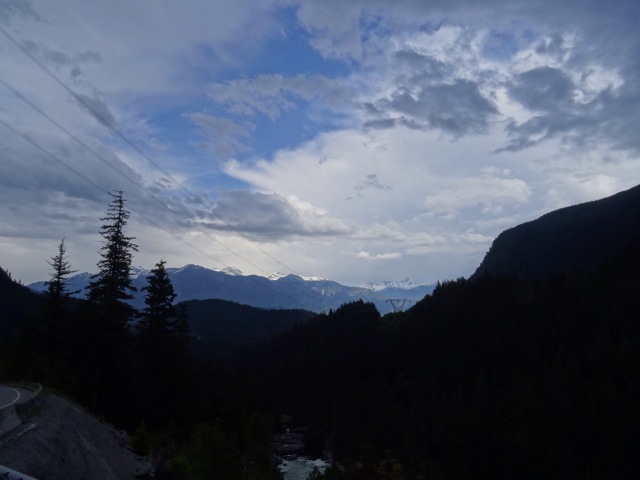 It was just a couple of kilometres the next morning to reach the lovely town of Pemberton. I broke camp quickly and treated myself to a big breakfast in the town with the warnings of a killer hill ringing in my ears. A few people that had told me about the hill had actually cycled it so I was certainly taking it seriously. I covered an amazingly flat 20 km through Mount Currie but from there the road kicked up sharply. What a hill it turned out to be. The first few kilometres gained height with a series of long switchbacks and then the road basically headed straight uphill. There wasn’t a moment’s respite with a constant steep gradient. It was just incredible. I paused briefly a couple of times to take photos, but remarkably, my legs never felt like they were going to give up. I was taking it as easy as possible but it was still pretty savage in places. As I climbed into the mountains, the views became more and more spectacular with glaciated peaks and endless forests. It took about two hours to cover 13 km as I gained more than 1000 m in height. This meant the average gradient was nearly 8%. I finally gained the summit of the climb and paused for lunch next to the Joffre Lakes Provincial Park. I was eating next to snowy slopes with avalanche warnings all along the road. It was just an incredible feeling. The next 60 km were some of the very best of my whole trip. I gradually lost a lot of the height I had gained and spent the whole afternoon passing jagged peaks, icy lakes and rampaging rivers. It was everything I had wanted Canada to be. The views around Duffy Lake were probably the highlight of the day. Eventually, I began to pass through a series of steep sided canyons and the landscape changed incredibly. The mountain sides became distinctly more dramatic and I finally descended into the town of Lillooet after a final couple of very steep, but thankfully, short climbs. The huge, swollen Fraser River runs through Lillooet, but aside from this, the landscape is remarkably arid. It is the northernmost extension of a desert that runs right up through the USA and into southern British Columbia. I camped on the beach next to the river and fell asleep exhausted, having covered over 100 km with more than 2500 m elevation gain. 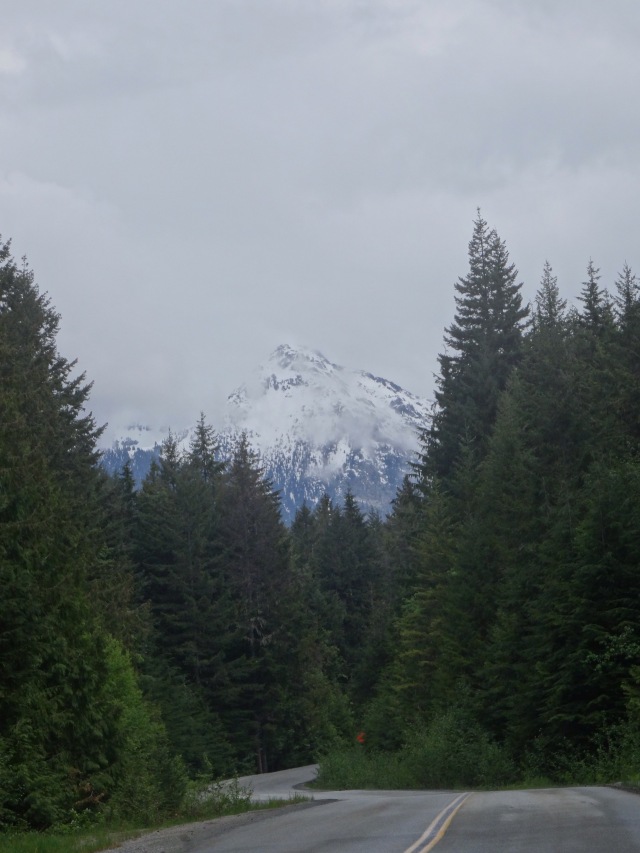 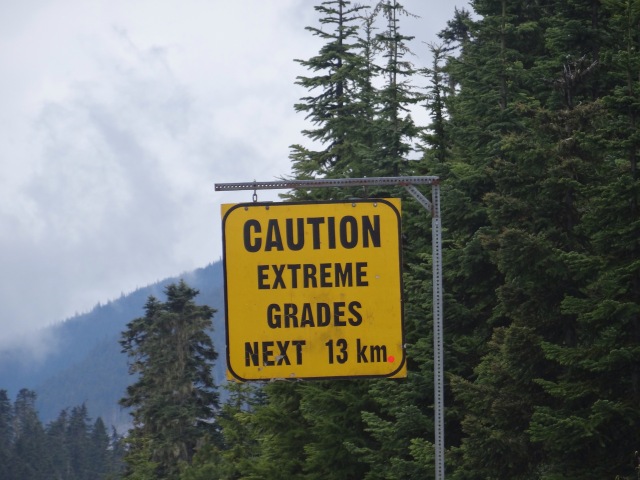 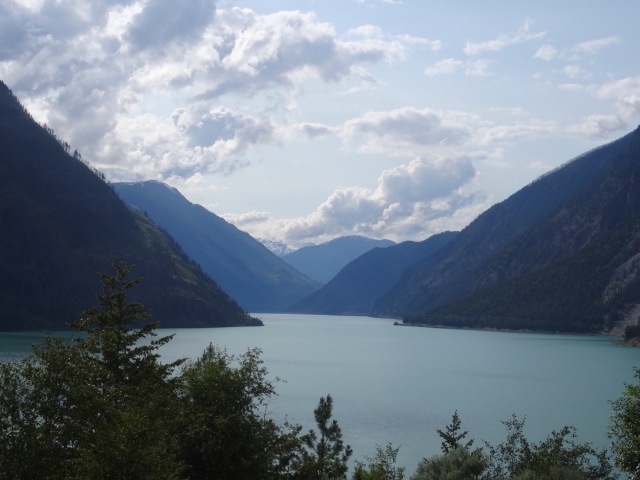 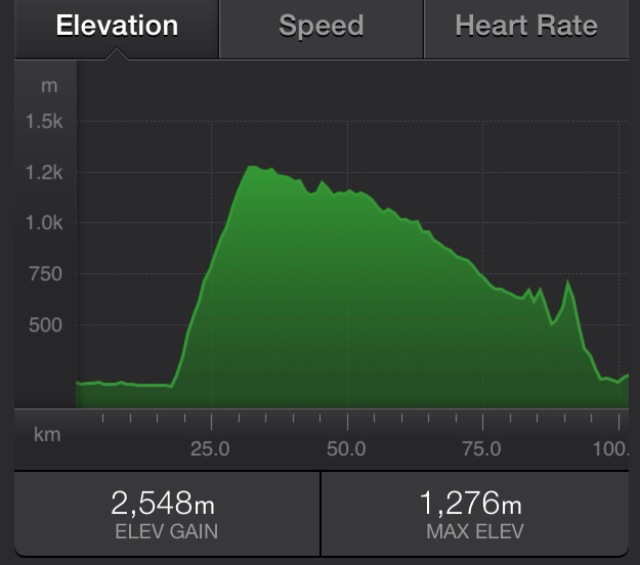 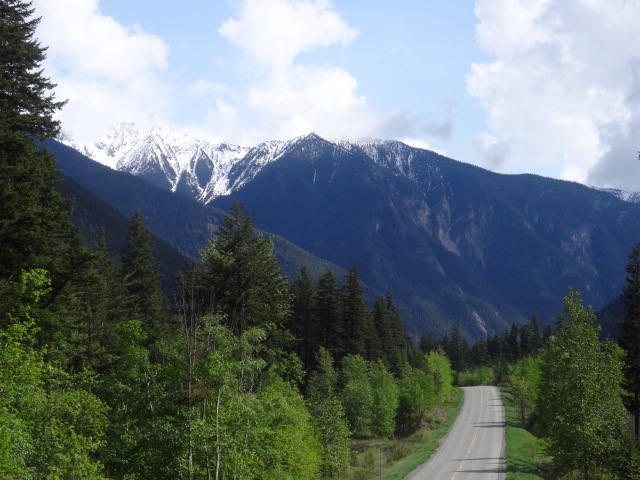 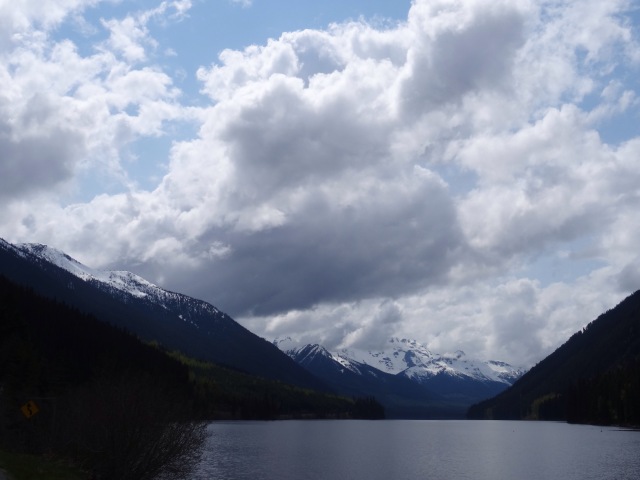 From Lillooet, I had a couple of days to get into Kamloops, where I would be saying with a Warmshowers host. Thankfully, I had stocked up in Lillooet as there wasn’t much in the way of provisions in the 65 km to Cache Creek. There were quite a few long, nagging ascents, as I made my way up to the high point at the Pavilion Lakes Provincial park. The ride was just wonderful though, passing through the enormous Fraser Valley and giving me a chance to race the Rocky Mountaineer Scenic Train. I had lunch at the lakes and then set off for Cache Creek. Some heavy rain set in but the downhill run over the next 20 km made for some very cruisy riding. I paused briefly in Cache Creek for groceries before heading out of the town to the Juniper Beach Provincial Park. The camping spot was wonderful, on the banks of the Thompson, yet another huge, fast-flowing river. There were now barely any trees with scrubby bushes and cacti covering the ground. It was an amazing change from the lush pine forests of just a couple of days before. I had a pretty poor night of sleep, with huge trains rumbling past the camp every hour or so through the night. I only had 65 km to Kamloops and a comfy bed and warm shower to go though. I set off expecting an easy day along the shore of Kamloops Lake. Unfortunately, the heat and surprisingly long hills meant for a much trickier day than anticipated. It was a long morning, but eventually I hit a steep downhill through the outskirts of town and into the downtown itself. It was great to relax for an afternoon in the town. In the early evening I headed to meet Simon and his family. They had kindly agreed to put me up for the evening and it was just perfect to chill out with them and get a great night’s sleep. 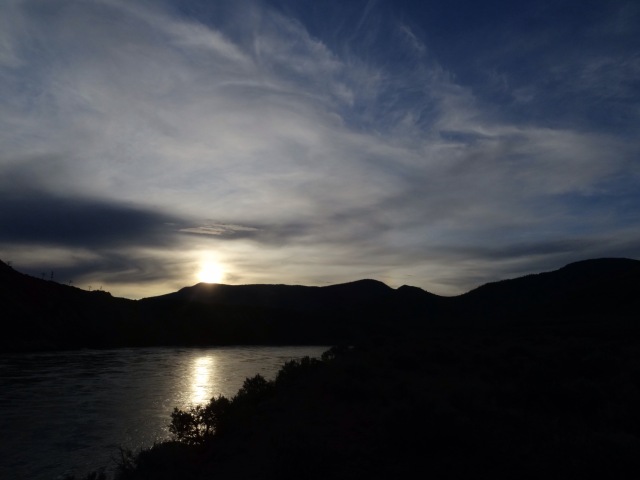 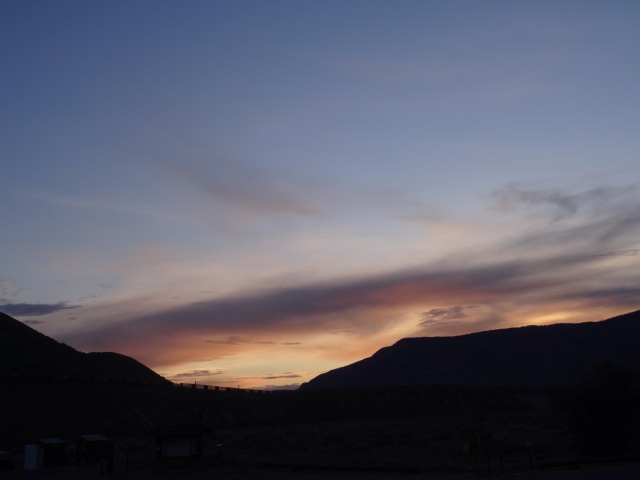 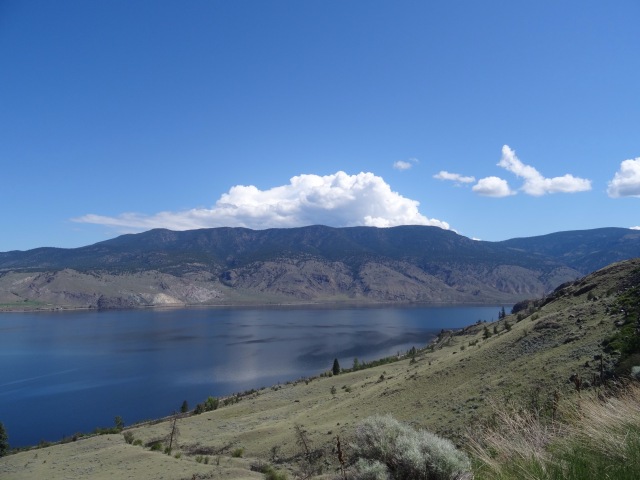 My first week in Canada had been amazing. I had already hit an altitude of 1260 m, breaking my previous highest point. It is hard to imagine how it could get any better, but this is exactly what was going to happen. I would have plenty of challenges to come on my way to Calgary, but this just meant more mountains. For me, the challenge of the climbs, the incredible views and the screaming descents would be just heaven!