Posted on June 20, 2014 By lukeyatesadventure

Last weekend I took part in the Brownlee South Triathlon at Petworth House in West Sussex so I thought I would write a race report with the hope of plenty more to follow!

This was meant to be my first triathlon and was sprint distance, but the event started disappointingly as an email arrived late Saturday night with the news that water tests had revealed the lake wasn’t safe to swim in. The swim was the discipline that held by the far the most fear for me; I’m fairly confident in the water and happy with the distance but have never been involved in a mass start so the pre-race nerves were almost entirely built on this. That said, the safety of the competitors has to come first so if there was a risk then they made the right decision and the format was changed to a duathlon with a 2km run, 30 km bike and another 5km run.

I arrived at Petworth very early as I wasn’t sure what to expect and thankfully the registration and set up in transition was well organised so I was able to get myself settled pretty easily. A couple of peanut butter and banana sandwiches later and it was soon time to get warmed up and set off.

The first 2km run was a complete blur. Some people went off seriously fast but I didn’t want to completely wipe myself out – and had no experience to know what was sensible – so started fairly steady. I got round in 7.14 and was soon jogging out of transition towards the South Downs’ hilly roads. There was a slightly odd dead zone that wasn’t timed as we headed out of the park and had to wait to cross a main road, which meant we set off on the bike as a large group. Very soon this broke up though as people paced themselves differently. I tried to settle in to a comfortable rhythm but the regular gradient changes made this difficult and at a couple of points the road was steep enough to have to get out of the saddle. A lot of my cycling training has been on my commute to work and the stop start nature of traffic and red lights meant I was slightly unprepared for a full-on time trial but eventually my peddling got more consistent and I completed this section in 56 minutes exactly.

Heading back in to the park there was another dead zone so my legs were slightly loosened as I entered T2 and transition was completed quickly. The run immediately threw up a nasty surprise as there was a significant hill after less than 1km. This really sapped the last energy out of the legs and combined with the quite thick grass and uneven nature of the paths made the last stage tough. I focussed on my form and stride-length and a final push for the finish past the house and lake saw me complete the 5km in 23.30 for a total time of 1hr 28m 16s.

Overall I was proud of myself but slightly disappointed with my time. I feel I can improve on the bike and have a 5km PB nearly 3 minutes faster, but the hills really took it out of me. I felt that the choice of venue and route was slightly odd as the running paths were basically poorly maintained off-road trails and even involved ducking under trees in places. Another competitor commented that he had never been on a tougher run as part of a triathlon so hopefully the next one will allow me to stretch my legs a bit more and produce a quicker time. And it would be pretty nice to finally get in the water! 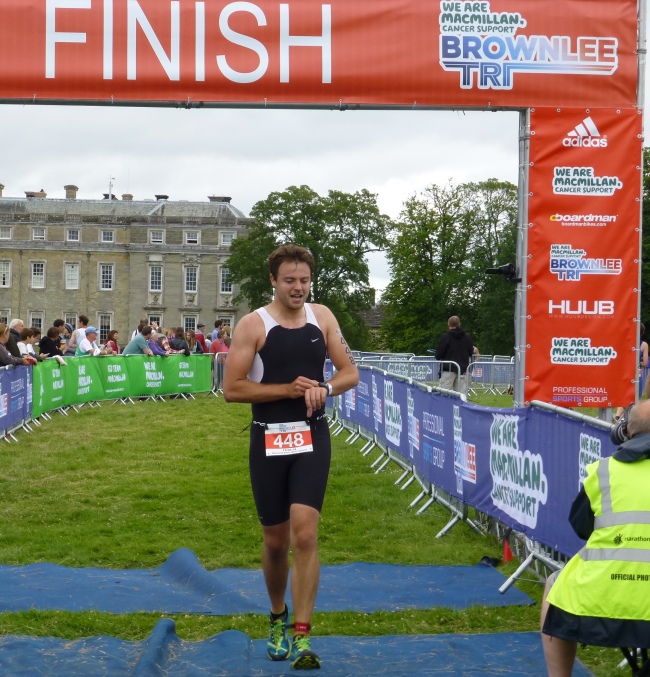