Crossing the Nullarbor – The Prelude

Posted on October 22, 2014 By lukeyatesadventure

Today my office is a table outside an awesome bike shop in the town of Melrose, South Australia. They serve great coffee, have free wifi and have turned the town into something of a mecca for mountain bikers. The sign outside reads “If you risk nothing, then you risk everything”. I’m surrounded by trees and climbed a mountain pass to reach the town. But before that, I had to cycle the Nullarbor, the infamous treeless plain, and the accompanying 1200 km of emptiness that make up the Nullarbor Crossing, on the Eyre Highway, from Norseman, WA to Ceduna, SA. This article will focus on the lead up to the Nullarbor, the 680km from Albany to Norseman. This is a little talked about stretch. There are hundreds of articles about the crossing the Nullarbor, but just getting to Norseman is an achievement in itself, because in all honesty, it is not all that much easier or less remote!

I set off from Albany feeling relaxed and rested, having had a great day with the McAllister family. It was tough to say goodbye. From the regular difficulties and uncertainties of the road, I had had a day where I could just switch off. I knew where I was sleeping. I had great company. I was well fed and watered. Cycling off into the unknown again wasn’t easy. Matters weren’t helped when I realised I had misread my map and had 168 km, rather than 117 km to the next town, Jerramungup. (See what I mean about the remoteness; that’s the same as London to Warwick!) This was quite a blow as I was intendingto sleep in Jerramungup and had allowed myself to set off late under the assumption that I didn’t have all that far to cover. Thankfully I had a decent tail wind and as I reached the one shop en route, at the tiny hamlet of Wellsteads, it looked as though I might make it before nightfall. The wind continued to blow, and despite a growing number of significant rolling hills, I dragged myself into town with the sun just set. It was my longest day to date and my first 100 miler. $20 seemed a little steep for a very average campsite but at that stage I just didn’t care.

The next three days promised to be tough and a fraction lonely, with just two towns between Jerramungup and Esperance, 300km to the east. This would prove to be an understatement as a really strong headwind made progress incredibly slow and painful. There were of course some highlights as always. At the end my first day out of Jerramungup, I pulled into a rest bay just short of Ravensthorpe, only to be hailed and called over by a group of caravanners who had set up there for the night. (Nb. Australia has regular rest areas at the side of main tourist routes that often extend back well from the road to allow for an overnight stop.) Two couples I had met several days earlier had been joined by a third. It was decided I would camp there and I was promptly given a beer and a bowl of stew. I was pretty chuffed! I spent a great evening, talking into the night by a campfire, the stars shining overhead and orchestral rock blaring from the caravans. It was all rather surreal. I was even given a great breakfast the next day. I set off with 190km to Esperance, and for a while harboured ambitions of having a long day and making it the whole way. The wind and long, dragging hills soon ended this fantasy. It was mid-afternoon before I made Munglinup, just 80 km further down the road. I was pretty tired and dehydrated. An hour later, I decided I could push on a little further and found another rest bay 15 km further on. The views and sunset were spectacular, as they brought down the curtain on what had been an exhausting and demoralising day. On the road early, I survived further headwinds and magpie attacks to make Esperance just after lunch. I immediately treated myself to a huge McDonalds! 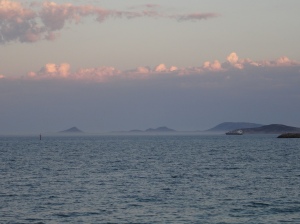 Esperance is a great small town. I had scheduled a rest and chores day and checked into the YHA as it was cheaper than the caravan park. I wasn’t complaining to have a bed for two nights. Esperance is surrounded by stunning but wild beaches. The wild side was brought home by the news of a shark attack just 20km away in which a surfer lost one arm and the hand from the other arm. He was lucky to survive but I can’t imagine how a young, active guy could begin to cope with injuries on that scale. My day off went well. My bike got serviced and it was in good shape except for a broken spoke, a story that would become all too familiar. I cycled to the town lookout for some great views, walked on the beach and saw dolphins and a whale and met some cool people at the hostel.

I left Esperance with the usual feeling of reluctance. Initially there were a few small towns and I stopped in both Grass Patch and Salmon Gums for drinks and food. I covered a fairly comfortable 120km although it was getting considerably warmer. This left me just 80km to cover the next day, to Norseman, the only town between me and the Nullarbor. Up early, I hoped to reach the town about lunchtime so I could have a brief rest for the afternoon before setting out the next day. With just 10km to go the heat was taking its toll but I decided to push on rather than take a brief break. This was not something I would repeat. Barely concentrating, a strong gust of wind caused me to veer sideways. I overcorrected and my front wheel slipped off the side of the road. The shoulder was very rough and before I knew it, I was tipping up in the air and hitting the deck. Thankfully I got got away with a bruised elbow and hip and no damage to the bike. It was a painful reminder that I should have paused for a swig of water and a quick cool down.

Norseman itself feels like a town clinging on. It is a former gold mining town but the finds are drying up and the major economy seems to be tourists preparing to cross the Nullarbor. The campsite wanted to charge me $35 for an unpowered site (as opposed to an average of $10-15 in most places). Instead I checked into the excellent railway motel. The former grandeur has worn off but it was clean and they gave me a double room including breakfast for $40. I could relax and watch tv, and headed to the pub to watch the NRL Final and have a huge pizza. 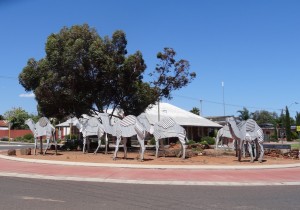 I went to bed feeling nervous but excited. The first three weeks had really been leading up to this point. It would probably be the toughest stretch of my entire trip. I thought I was ready but returned to feeling like a complete novice, as though the experience gained so far was barely scratching the surface of what was required. The week from Albany to Norseman had proved pretty draining, but the need to manage water, food and tiredness would prove to be excellent preparation for the coming days. I had met some great people as always, and Esperance is easily one of my favourite spots in WA. I would love to return to explore the remote beaches of Cape Le Grande National Park with a 4WD. What I couldn’t know at this time was that this was just the beginning. The difficulty, mind-numbing monotony, extreme generosity and staggeringly brilliant moments were all ahead of me.

11 Comments on “Crossing the Nullarbor – The Prelude”